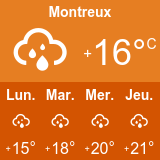 Thanks to the Narcissi forecast, plan your tours based on the flowering areas.

Narcissi need your help in order to keep blooming every year.. With your donation, you contribute to the protection of this flower in Montreux Riviera. Thank you very much!


In return, you will receive a bunch of narcissi during the blooming period and you will be listed on our « wall of narcissi ».

For over a century, Narcissi have been the symbol of Montreux and the areas above the Vaud Riviera. Every time the region was mentioned, their flowering in May was highlighted as a unique phenomenon. During the Belle Epoque period, when Narcissi came into flower in May, it was the attraction of the year.

From 1897 to 1957, Narcissi Festival was the flagship event of Montreux. International orchestras, ballets and operas were playing. Floral parade floats sumptuously decorated were crossing the city. In 1954 this event was even the first TV retransmission on Eurovision. Organized in May, then in June, this festival marked the end of the winter high touristic season at this time. The last edition of the Narcissi Festival took place in 2015.

Unfortunately, the abundance of the Vaud Riviera's symbolic flower is steadily decreasing, both in the region of Les Pléiades and in the areas above Montreux. Thus, May snow, as the blooming of countless flowers is called, will be nothing more than a pleasant memory in a few years to come if no action is taken as a matter of urgency.

What about you? You can also protect the Narcissus by following a few simple rules:

The Narcissi Riviera Association is very active to safeguard this heritage. Its main activities are: